Discussions were held with the Ticketing & Support department of AFC Ajax N.V. about optimizing the ticketing & access process for away matches. Due to the innovative nature and proven delivery of proven software / app development, Ajax has awarded the contract to BPI Services B.V. 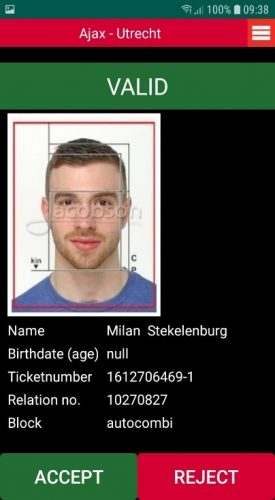 The smartphones of the stewards are connected to each other. If for some reason the Wi-Fi or 4G fails, the smartphone itself can still be scanned locally. As soon as there is a connection again, the data is shared with the ticketing system.

The app can be operated in Dutch and in English.

The picture on the right shows a screenshot of the app.

The second part is the management tool.

In this tool, the away matches are created and the details of the supporters are uploaded per match. The management tool also provides insight into the progress of the scan actions. You can think of a list per match with the details of the supporters and the status such as: already scanned, still to be scanned, blocked. It is also possible to change this status in the management tool. In addition, we can see per app, who is using the app, when they last scanned a ticket, how many scans were made and whether they were connected. At the end of the competition an export can be made of the data with the overall status. The management tool offers direct insight into all promotions and progress during and after the competition.

The app will be used in the new football season. This allows Ajax and the stewards to offer their supporters access to away matches faster, friendlier and more safely.

Want to know more about app development or about the project at Ajax? Please, contact us.